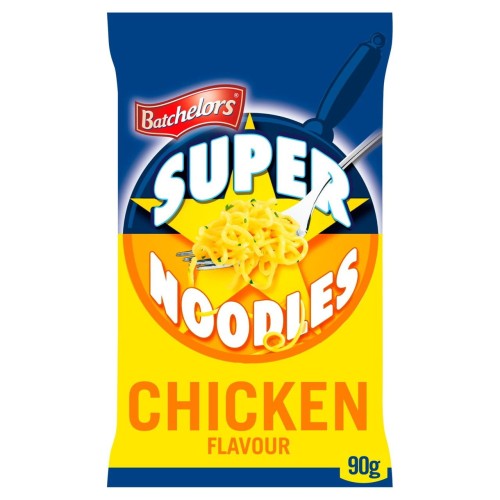 Super Noodles in a tasty Chicken flavour sauce. 4 min cook. Serves 1 as a great snack. Serves 2 as part of a main meal.

Store in a cool dry place.

Full cooking instructions are printed on the packaging.

Batchelors has been creating tasty food for over 100 years. William Batchelor, a former tea salesman, began the company in 1895, selling packets of peas. He soon adopted the breakthrough canning technology, supplying soup and vegetables to busy British homes. In a short space of time, it became one of the most successful canning companies in the UK. And later, under the drive and ambition of William's daughter, Ella, it became a household name.

In 1949 Batchelors began making dried soups, by 1972 these became know as Cup a Soup. Today, over 250 million mugs of the famous Cup a Soup are consumed each year in Britain making it the nations favorite instant soup.

Since then Batchelors has continued to introduce tasty, convenient foods for all of the family. With favourites like Super Noodles, Savoury Rice, Pasta n Sauce, Mushy Peas and more recently Soupfulls.

up
Shop is in view mode
View full version of the site
Sklep internetowy od home.pl